The Navigation Protection Act ("NPA") is once again under review by the Federal Government.

It wasn't long ago that Stephen Harper's Conservative government overhauled the Navigable Waters Protection Act and changed its name to the NPA. The thrust of those amendments were to limit the application of the legislation to "Scheduled Waters", a limited number of waterways specified in the schedule of the NPA.

Before the Conservatives' amendments, the legislation applied to all "navigable waters" in Canada.  Accordingly to longstanding judicial precedent, a water is navigable if it can potentially be used for navigation. Actual use is largely irrelevant. Accordingly, the old pre-Conservative legislation had very broad application and required industry and provincial/territorial governments to obtain approval for works that were unlikely to actually interfere with navigation - hence the Conservatives' decision to limit the application of the Act to the Scheduled Waters. This change was applauded by industry as bringing certainty to the approval process. It was correspondingly opposed by environmental groups  who saw the change as another rollback on environmental protection in Canada (the other big one at the time being amendments to the Fisheries Act).

The new changes being proposed by Trudeau's Liberal government will re-introduce the application of the Act to waters not listed in the Schedule. In summary, a proposed development in a "navigable water", irrespective of whether that water is listed in the Schedule, may still require a permit or public invitation to comment on the project. The only exception will be for "minor works" which have not yet been designated but will presumably include things like boathouses and boat ramps.

As a result, the scope of the legislation has been broadened significantly and resembles once again the pre-Conservative model. To counteract this, the Liberals have finally added a definition "navigable water" so that "use" or "reasonable likelihood" of use are required before a body of water is considered "navigable". This should quell some concerns of industry etc. that the Act will apply to projects that have no realistic impact on navigation.

Other changes will include:


West Coast Environmental Law has produced a very helpful diagram depicting when approvals will be required under the new legislation: 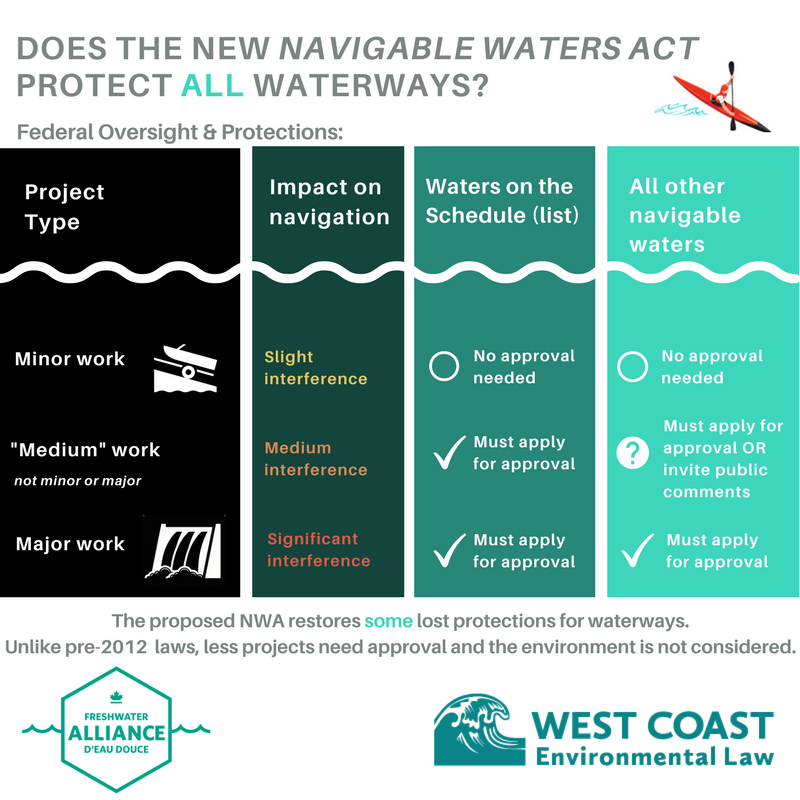