Another Case Confirming That Municipalities can Regulate Moored Houseboats Etc.

The Supreme Court of British Columbia, in the case of The Corporation of the City of Victoria v Zimmerman, 2018 BCSC 321, has once again confirmed that municipal bylaws placing restrictions on a boat-owners right to moor in a municipal waterway do not offend the Federal Government's exclusive jurisdiction over "navigation and shipping". The Court essentially followed its precedent in the case of West Kelowna (District) v. Newcomb, 2013 BCSC 1411 which dealt with very similar issues.

The facts in this case were straightforward. The Plaintiff, Mr. Zimmerman, moored his live-aboard sailboat in Victoria's Gorge Waterway. When the city passed a bylaw restricting his ability to moor on a continuous basis, he challenged the constitutionality of the bylaw. For ease of reference, the bylaw prohibited all of the following in the Gorge Waterway:

[55]        Zoning bylaws may incidentally affect navigation and shipping, while still being in pith and substance about land use: West Kelowna CA at para. 28.

[56]        Zoning bylaws in relation to ships or vessels on navigable water present a double aspect. The fact that the federal government could enact restrictions on mooring and anchoring in respect of a specified body of water by way of the Vessel Operation Restriction Regulations, SOR/2008-120 under the Canada Shipping Act, “does not support the corollary that any provincial regulation of moorage and anchoring would be in pith and substance an invasion of the federal navigation and shipping power”: West Kelowna CA at para. 32.

[57]        The generally applicable legislative regime, which is largely permissive as to anchoring and mooring on navigable waters, does not trigger the doctrine of paramountcy in relation to zoning bylaws that restrict the duration of anchoring and mooring. There is no operational conflict or frustration of purpose in relation to such permissive federal legislation: West Kelowna SC at para 50.

[58]        However, to the extent a zoning bylaw purports to prohibit even “[t]emporary moorage directly incidental and related to the active recreational use of vessels”, it does intrude on the core of the federal power over navigation and shipping and is thus inapplicable under the doctrine of interjurisdictional immunity: West Kelowna SC at paras. 44 and 46.

[59]        In this case the Bylaw does not purport to regulate or restrict the temporary moorage of vessels. Instead, the 2016 amendments to the Bylaw were made to ensure that the Bylaw was compliant with the West Kelowna decision. The Bylaw does, however, prohibit the construction, for example, of docks and the long-term anchorage and/or moorage of boats in the Gorge Waterway.

[60]        The question of whether the time periods that are specified in the Bylaw, and which limit how long a vessel can be moored either continuously or within a 30-day period, was not addressed directly in the evidence that was filed before me. I do not, in such circumstances, consider that it would be appropriate for me to second guess the adequacy or appropriateness of these time limits.

As result, this case would appear to settle the law on this issue and confirm yet again that municipalities have authority to place restrictions on where houseboats are moored.

A photo of the Gorge Waterway is attached: 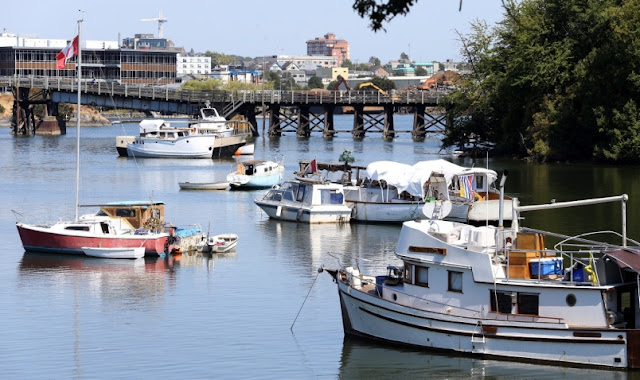